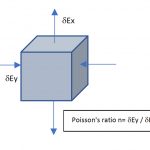 Just like several mechanical properties like Yield, ultimate strength, etc., Poisson ratio helps in the design of structures. It helps to understand secondary stresses that will develop during service. Thus, for example in high pressure fluid transport through pipes, when pressure pulses arise the hoop stress that develops will induce secondary stresses in longitudinal direction which will force the pipes to contract. If these pipes have welded sections, sometimes the weldment may fail due to this contraction. Another situation where Poisson’s effect may impact is in Geological deformations like earthquakes, etc. Materials with high Poisson’s ratio will contract a lot compare to materials with low Poisson’s ratio.

Tensile testing helps to determine basic load bearing capabilities of materials under tension. These properties are used in engineering and design of components and structures. Typical examples where these properties are used are design of guy cables that support bridge structure, wind turbines, aircraft wings and fuselage structures, etc. One can get several material parameters… END_OF_DOCUMENT_TOKEN_TO_BE_REPLACED