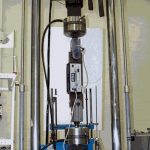 Torsion testing is done generally to understand the performance of materials and components when twisted and shear loaded. The test is done by rigidly anchoring one end of cylindrical bar or tubular sample and applying a moment to the other end so that the sample is twisted about its axis up to certain degree of twist or until failure. Occasionally moment is applied to both ends in opposite direction. Typical application involves torque tubes in four-wheel drive equipment, cables for hoisting loads, drill pipes in oil and gas drilling, etc. Typical properties measured are shear yield, ultimate shear and shear modulus.

Capability – At TTL, we have test frame with axial torsion capability. The applied torque is limited to 1000 in-lb limiting most sample type tubular thin walled samples. The tests are done at low rate of loading