Shear testing is designed to understand the behavior of materials under shear loading. A simple example is a torque tubes used in torque transmission in rear wheel and four-wheel drives in cars and trucks. In many instances shear loading appear as a component of overall loading. For example, in case of load bearing beams in building and structures shear stresses appear as part of bending or flexural loading. Another area, where shear properties are important are, fasteners used to join components. 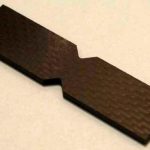 Typical specimen geometry for in plane shear tests (see figure) are rectangular sheet or bar sample with a notch in the center to focus the loading. Out of plane tests does not require any materials preparation.

Capability – At touchstone testing laboratory we run in plane shear tests (both three and four point) commonly on polymer composites, carbon-based materials, metallic and carbon foams, ceramics and ceramic composites. We have test frame with capability from few kilo newtons to 500 Kilo newtons capable of running large scale shear tests like building materials. Tests are generally done at ambient conditions low rate of loading for in plane shear test. Out of plane tests like punch shear, etc., are done at high rate of loading. These tests may be done also at high and low temperature.