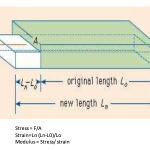 Modulus testing involves measuring the response of a material to applied forces. More specifically, the change in deformation to differential change in applied force is measured. The applied forces may be in elastic or plastic range. In general modulus testing is done in elastic range or before the material starts to yield. These are called elastic modulus. There are three different types of moduli namely Young’s or elastic modulus, shear modulus, and bulk modulus. Young’s modulus is measured generally in tension or compression and measures the response of the materials to elastic forces before the material starts to yield. Shear modulus measures response to shear forces, while bulk modulus measures response to bulk or volumetric forces. Secant modulus is measured in the plastic range

Capability – At Touchstone Testing Laboratory we can measure elastic or young’s modulus, shear modulus, and secant modulus of metals, alloys, ceramic, polymers, and composites at any temperatures from -200C to 2400C. We use strain gages and extensometers to measure the strain.