Impact testing measures the resistance to fracture of any materials during high strain rate loading. In this test, a sample of material is held in rigid fixture and struck with a hammer with predetermined potential energy. The energy absorbed is measured by measuring how far the hammer swings in the opposite direction after the impact. Initial potential energy can be varied by positioning the hammer at different heights as well as varying the mass of the hammer. This is a very simple test to conduct and provides invaluable information regarding fracture resistance, energy absorbed during fracture, ductile to brittle transition by varying test temperatures. 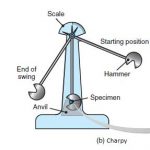 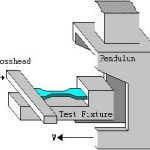 Two most commonly used impact testing are Charpy and Izod impact testing. Basic differences between them are the geometry and orientation of the specimen in the test set up. Thus, in Charpy test a rectangular sample (typically 10mmx10mmx75mm) sample is held horizontally in a simple beam position, while the hammer strikes at the center of the sample. More often the sample is notched where the hammer strikes to intensify the loading condition and develop the stress state in to triaxial tension at the root of the notch. The notch should be facing on the side opposite to where the hammer strikes. In contrast in Izod test the sample is held vertically in a cantilever position. The hammer strikes at the edge of the sample away from the notch position. While loading mode in both case is bending, the orientation of samples is different to high light any differences.

In addition to the above two testing occasionally it may be required to understand the behavior of materials in a tensile mode of loading. This is determined by tensile impact test. In this test, a tensile sample is attached to a hammer through fixtures and the hammer strike against a steel stopper thus subjecting the test sample in to high strain rate tensile loading. Generally, a round bar regular tensile sample is used. More often again the sample may have a notch cut around the circumference to create triaxial state of loading at the notch root. 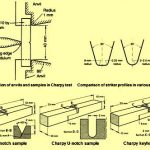 Both Charpy and Izod tests use rectangular bar specimens typically 10mm x 10mm cross section and 75 mm long cross section. Sample length may vary depending on test type, availability of materials, etc. Occasionally sub size samples may be used to accommodate product geometry. Geometry of the notch may also vary (see figure on the left) depending on the material, type of test, etc. Three different types of notches, namely V, U, keyhole type notches, are used for Charpy test, while most Izod test uses V type of notch. In case of tensile impact typically round bar samples is used with circumferentially cut notch, normal to the axis of the sample. Occasionally a tubular sample may also be used for tensile impact test. The dimensions are specified by the customer.

Majority of the tests are conducted at ambient condition, namely room temperature and pressure in air. Certain materials need to be tested under non-ambient condition because they become brittle under certain environmental conditions. For example, ferritic steels undergo ductile to brittle transition in subzero temperatures. It may be desirable to understand the transition behaviors of these class of materials. These materials are tested typically from 100C down to -200C and sometimes close to absolute zero conditions. The test temperatures depend on the application and material types.

Capability – At TTL, we have two impact hammers one for large range up to 245Ft-Lb (1600N-M) for testing tough metallic materials and a small one with energy range up to 2Ft-Lb (12N-M) for testing polymers and polymer composites. In addition, we have capability to test under subzero and further in to cryogenic region. All testing is done in static air. We test routinely metallic, ceramic, polymers, and polymer composites for a variety of customers from aerospace, nuclear, power generation, oil and gas market.